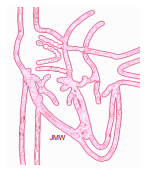 The keys to prevention are in identifying our own traits or behaviors that hasten arterial decay. Some are obvious, like overeating and smoking. Others depend upon tests of metabolism and things that we are unable to see or feel until its too late.

Corrective efforts range from simple and risk free to complex. Simple efforts are part of a healthy lifestyle. Complex efforts employ medicines to control what lifestyle cannot. Medicines that control diabetes mellitus and blood pressure, lower LDL cholesterol and reduce the chance of blood clotting have an enormous impact on the chance heart attack.

Diabetes mellitus (DM) is more complicated than blood sugar. One type of DM develops after the body stops making insulin. It is most common in young people and is treated with replacement of insulin. Non-insulin requiring, Type II or Adult Onset DM is actually a collection of metabolic problems with impaired response to insulin in common. Elevated blood sugar is the most easily recognized and dangerous part of the disease. However, managing blood sugar is only one part of addressing the disease.

There is more to diabetes than blood glucose

Adding extra insulin on top of what the body makes helps to control glucose, but does not correct the underlying problem. The goal is to restore the body’s sensitivity to insulin, primarily through diet, exercise and reducing body fat. Medicines like Metformin can reduce the need for insulin. The choice of medicines used for control must be tailored to you and is a rapidly changing field. Therefore, regular review of the value of individual medicines with a primary physician or diabetes specialist is an extremely important measure to prevent heart attack.

We need muscle. Aside from locomotion, muscle uses energy and helps to control the amount of fat and sugar in blood. Fat, on the other hand, was intended as the small reserve for times of need. Fat speaks. It has a personality opposite muscle, urging the blood content of fat and sugar to rise. Excess body fat residing in the belly is most dangerous.

The goal is to keep the amount of fat controlled without losing muscle. Weight loss driven by strict calorie restriction takes from both fat and muscle. Any weight that returns is usually fat. The net result of weight that swings down and up is less muscle in comparison to fat. Reduce the waistline with diet and exercise to maintain muscle and keep at it to avoid swings.

Regular activity improves sleep, lessens joint pain from mild or moderate arthritis, and confers an overall sense of wellbeing. The exercise for this purpose uses large muscle groups in moderate activity for 20-30 minutes each day. Specific activities and their energy expenditures are provided in booklet 3, “Preparation for the unexpected”.

Swing a stick and you’ll probably hit a diet. With so many different options, the basic idea sometimes gets lost in details. With respect to heart disease, the KEY POINTS are:

An easy first step in calorie reduction is to follow the BRPP plan. That is to avoid bread, rice, potatoes, and pasta.

Don’t. There is no magic here. It is incredibly hard to stop smoking. Nicotine supplements help, as do a few medicines. Talk to your doctor and find what works best for you. Just stop.

In addition to medicines that treat diabetes, two types of medicine decrease the chance of having a heart attack: those that reduce LDL content in blood and those that retard blood clotting.

Lowering LDL. LDL transports cholesterol and triglyceride in blood. It is like a small sac that briefly allows oil and water to mingle. It is also the primary irritant of arteries, promoting CAD. Medicines that slow cholesterol production are our most effective option for reducing the number of LDL capsules in circulation. 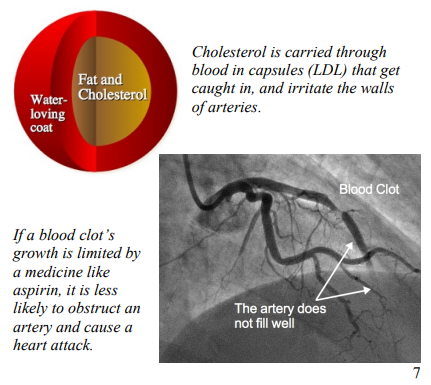 The average calculated LDL-cholesterol concentration in US citizens is about 120-130 mg/dl. The value that appears to confer the lowest risk for heart attack is well below 100 and probably less than 50 mg/dl.

Oral medicines called Statins lock up the assembly line for cholesterol production. Less cholesterol is made inside of the liver cell, prompting a recall of the LDL in circulation. As a rule, a 20-30% decrease in LDL-cholesterol is necessary to reduce the chance of a heart attack. The main limitation with statin type drugs is that between 5-15% of people develop muscle discomfort as an intolerable side effect.

LDL gets back into the liver through a special window. PCSK-9 inhibitors (Proprotein convertase subtilisin/kexin type 9) hold that window open and decrease the amount of LDL in the blood well in excess of the 20-30% threshold. They can only be given by injection, but are very useful when a statin is insufficient.

Blood Clotting. Aspirin and other anti-platelet drugs are the most effective means of slowing blood clotting under conditions where blood flow is fast, like in arteries. Stunning platelets does not prevent artery walls from becoming irritated and angry, but limiting the size of a blood clot that forms in an angry artery definitely prevents heart attack.

Influenza Vaccine. Influenza troubles people with heart disease in two ways. Like any infection, it makes the heart work harder during the battle to recover. In addition, multiple effects of the virus can actually cause changes in arteries, promote blood clotting and trigger a heart attack.

Although medicines can help after the infection has begun, the most effective protection from the harms of influenza is a vaccine to prevent infection. Influenza is a master of disguise that changes its face to evade immunity. Therefore, we can suffer from influenza repeatedly. A new vaccine is made each year to match the face that the virus has chosen. Anyone with coronary artery disease or at very high risk for its presence should strongly consider getting the influenza vaccine on a yearly basis.

Angiotensin Converting Enzyme (ACE) is a key point in the network controlling blood pressure, kidney and heart function. ACE-inhibitors are a group of medicines that lower blood pressure, protect kidneys, and benefit people with heart disease unrelated to coronary artery disease. After a heart attack, ACEinhibitors protect the heart as it heals. Blood pressure control is crucial to avoiding heart disease. In people with coronary artery disease and in those at high risk for its development, ACE-inhibitors also reduce the risk of heart attack.

The statins are the only oral medicine that can lower LDL effectively enough alone to lower the risk of heart attack. Several other types of medicine also influence LDL. They are not particularly effective alone but may serve as helpful additions to the statins.

Ezetimibe is a synthetic inhibitor of cholesterol absorption in the intestine with an impact similar to the effect of resins.

Niacin is a B-vitamin that convinces the liver to make less of the fat carrying capsules that become LDL in blood. Niacin increases acid production in the stomach, causes terrible flushing and worsens gout. Its place in treatment is very limited.

Fat carrying capsules deliver triglyceride as well as cholesterol. When the capsules containing mostly triglyceride are overabundant in blood, the pancreas can become inflamed. The resultant illness, pancreatitis, can be very severe. Therefore, when blood triglyceride exceeds 500 mg/dl, treating LDL has to take a back seat to lowering triglycerides. Fatty acids are named partly by the presence (unsaturated) or absence (saturated) of kinks in their tail and where the kinks are located. If a kink is found three places from last (omega) carbon atom of the fatty acid, it is an Omega-3 fatty acid.

DHA and EPA are the key components to fish oils

Cold, salt-water fish caught fresh, not farmed, are common sources of Omega-3 fatty acids. Docosahexaenoic Acid (DHA) and Eicosapentaenoic acid (EPA) are the two most useful influences on blood concentration of triglycerides. Fish oil supplements are effective when more than 1000 mg/d of DHA and EPA are supplemented to the diet.

The fibrates are the most common pharmacologic choice to lower triglyceride. Only Fenofibrate or Fenofibric acid should be used in conjunction with a statin drug.

Antioxidants are the cell’s version of protective clothing. Cells are constantly generating very small molecules called radicals while harvesting energy, for defense and for rudimentary communication. Radicals modify or divide other molecules without the help of enzymes. When radicals are produced in the course of harvesting energy, they may be cast off like sparks from a flame. The cell must protect itself from injury. Antioxidants are that protection.

Antioxidants have a time and a place. With CAD, we just don’t know what time and which place.

Radicals are involved in several processes believed to be important in the development and progression of CAD. As part of a communication network, oxygen-based radicals shift the cell’s general mood toward inflammation and clotting. Although these effects are undesirable in the arteries, antioxidants are unlikely to disrupt intentional communication inside of a cell. Radicals can affect LDL to make it more irritating to the arteries. Antioxidant supplements may protect LDL from this type of change. The better means of keeping LDL from becoming tarnished as it lingers in the wall of an artery is to lower the blood levels so much that it does not get trapped there in the first place.

The hardest recommendation to follow for prevention of heart attack is also probably the most important: eat less and exercise more. Even following a perfect lifestyle, some of us inherit a predilection to arterial decay that requires the assistance of medicines to reasonably lower our risk. The major question each of us has is, “Am I one of those people?” The answer is probably yes if,

A decision to take medicines after a heart attack is fairly straightforward. The natural course of disease without medicines is more dangerous than concerns for medicine side effects. Without such intimidation, the decision is difficult and very personal. A host of helpful tools can use your age and risk factors to calculate your risk of heart attack in the next ten years. However, no tool is more useful than sitting down with your physician who can put that risk into context and help you decide that medicine is warranted.