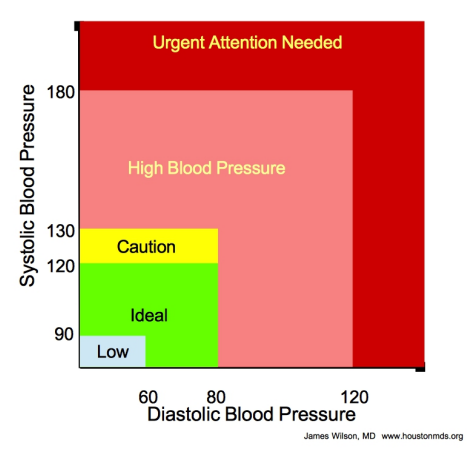 The current blood pressure recommendations are shown on the booklet cover. How we got there is quite a story and helps to understand the how and why that go with the recommendation.

By the way, these numbers aren’t lb/in2 like your car tires. The values are in millimeters of mercury.

No one knows when high blood pressure first appeared. However, its complications have been around as long as written history.

At a time when people were living from meal to meal instead of paycheck to paycheck, blood pressure was unlikely to have been a major health problem. More pressing concerns were fevers, starvation, and tigers. Later, as accumulated learning and civilization brought longer lives and regular meals, the complications of high blood pressure began to register among physicians. Blood pressure may deviate from its natural settings for a number of reasons: heredity, hormones and kidney function. However, in most of us, it begins with salt intake, excess body weight and too little exercise. As diets began to change, with the liberal use of salt as a food preservative, blood pressure probably grew in importance. It grew silently because blood pressure cannot be felt or seen. It is not disfiguring. Its presence is known only when measured. Until about 200 years ago, no one measured. Widespread measurement of blood pressure truly began at the dawn of the 20th Century.

High blood pressure urges heart muscle to thicken, just as the muscle in the arm does when it is forced to lift weight repeatedly. Artery walls also grow thicker. These adaptations are provisions of nature to overcome challenges normally imposed by physical activity. Under the constant influence of abnormal blood pressure, adaptations become entrenched and cause disease. Thick heart muscle becomes stiff and inefficient. The thickened arteries lose their rubbery quality and offer resistance to blood movement. Abnormal arteries disrupt blood supply to parts of the kidney and brain.

Heart muscle and artery walls get thicker and stiffer. Everything happens in silence.

The laboring heart and failing kidney produce fatigue, difficulty breathing and fluid retention, historically referred to as “dropsy”. Meanwhile, arteries that fail to thicken under the load may stretch, enlarge and rupture. Rupture of an artery in the brain produces an illness known in the past as “apoplexy”. Today, we know these problems as heart failure, kidney failure, and stroke.

Before there were gauges and computers, the idea of pressure was referred to by the weight of a fluid or how high it stood in a container. Water is the ubiquitous liquid, but for experiments with different pressures, very tall containers of water were necessary.

Elemental mercury is normally a fluid. It is also very heavy (14X water). Therefore, a tube filled to some specific level of mercury represents the same weight or pressure as a much larger tube filled with water. This made measurements much more convenient. Modern gauges can relate pressure in different ways. Your tire gauge is in PSI (lb/in2 ). However, the height of a column of mercury is still used to describe blood pressure.

Blood pressure is most easily measured by recording how hard we have to press on an artery to force it shut. The current technique uses a cloth belt, into which an inflatable bladder is sewn. 7 The belt is wrapped around a limb, with the bladder positioned over an artery. With the belt held tightly, the bladder is inflated to the point at which the pulse disappears. To measure pressure, the bladder is attached to a column of mercury in glass tubing. The rise of mercury is the pressure being applied to the artery. 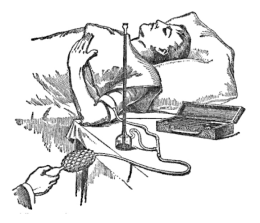 Modern devices use a gauge rather than the mercury filled tube, but the markings are listed as millimeters of mercury. In addition, a stethoscope is used to listen to the artery, rather than feeling the pulse. 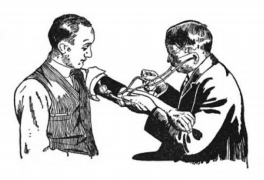 Although not presently a standard, a two-week average of recordings taken at home, with an automated device, may be a more accurate reflection of blood pressure than those taken in the office setting.

After blood pressure measurement became commonplace, the values in young, healthy adults were used to get an idea of normal values. However, a child’s blood pressure is quite low, 80-90 mmHg and the young adult’s slightly higher at about 100- 110. Older, healthy people had pressures that were even higher still. Therefore, many people felt that “normal” had a wide range and that blood pressure probably increases, as we grow older.

The first population studies of blood pressure came from insurance companies in the early 1900’s!

Statistics. Life insurance companies quickly realized the value of blood pressure measurement as a tool to uncover hidden risk. Two companies applied some recently developed mathematical techniques to provide the first scientifically derived estimate of normal blood pressure. To do so, they examined the blood pressure of in large numbers of normal people. They also compared pressure at enrollment to later health status. The results suggested normal to be a systolic value in the 120’s and not more than 140. A blood pressure over 150 warned that the individual who appeared normal today, might not stay that way for very long.

Blood pressure has since been examined exhaustively from the perspective of age, body habitus, diet, habits and heritage. In addition, illnesses that develop over time have been correlated to the first blood pressure, its change over time, and with the context of additional problems like diabetes mellitus or smoking.

Anyone concerned about the eventual development of cardiovascular disease can follow the recommendations of healthy lifestyle without risk of harm and with full expectation of benefit. The potential gain makes the recommendation all the more urgent when blood pressure is consistently above normal, 120/80 mmHg

The potential for medicines to cause unintended side effects required that the relationship of blood pressure and its complications be revisited during medical care in order to define when the illness was more dangerous than the intended treatment. A threshold of 140/90 is the point at which medical treatment of blood pressure is consistently valuable.

Meanwhile, diabetes, high cholesterol, and smoking contribute to the same diseases caused by high blood pressure. People who have an illness or behavior posing a threat to their health, in addition to abnormal blood pressure, gain from medical treatment beginning at values in excess of 130/80.

Treat blood pressure above 130/80 if you have diabetes

Some medications can address more than one illness at the same time. Thus, the presence of any of these additional illnesses often drives the choice of medicine. Absent that, whatever medicine works best, with the least side effects is a good choice.

What is the goal blood pressure?

Since medicine can occasionally overcorrect, the goals of blood pressure during treatment are different than those with diet/lifestyle. Generally, the goal is to reduce the blood pressure to below the threshold value that prompted treatment. If you started because of a blood pressure above 130/80 in the presence of another illness, then that is the goal. It probably should be the same for everyone, but without additional illnesses, <140/90 is acceptable.

But I can’t tolerate that blood pressure!

Ideal blood pressure is shown on the COVER as the GREEN ZONE. A consistent diastolic blood pressure over 80 warrants a discussion with your physician and consideration for treatment. For systolic values,

The caveat to all of these recommendations is that